So, who’s heard of the KonMari method of decluttering? Or maybe you’ve heard it referred to as The Life-Changing Magic Of Tidying Up?

If so then perhaps, like me, you have found yourself wondering ‘What is the KonMari method’? Well, wonder no more, because I’m here to explain everything.

Before we get in to this, let me warn you…. the KonMari method of decluttering can actually be life-changing, the title of the book is no exaggeration – or at least that’s my experience!

After working my way through the KonMari method of decluttering my entire house (which, let me tell you, took some doing), I feel so much more focused and less stressed out by all the ‘noise’ of clutter around me.

So I really encourage you to give it a go, particularly if life is getting on top of you and you feel like you can’t see the wood for the trees – so let’s get to it!

What Is The KonMari Method?

Put simply, the KonMari method of decluttering is an extreme form of decluttering created by Marie Kondo in ‘The Life-Changing Magic of Tidying Up‘, which now has something of a cult following.

The aim is to overhaul your home and possessions so that you never have to tidy again. If you like the idea of never tidying again (presumably that’s everyone then), working your way through the KonMari method of decluttering is well worth the effort.

This graphic shows the overall process: 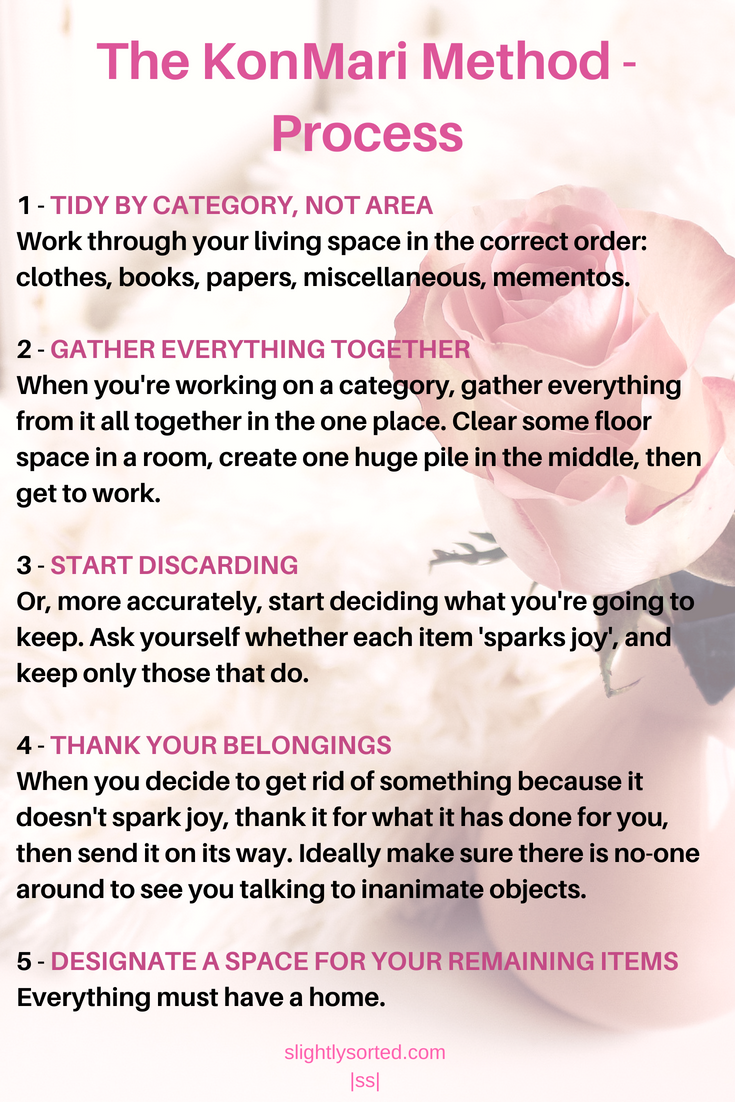 The KonMari method involves going through your home in categories (rather than room by room) and deciding whether an item ‘sparks joy’ or not. If it does, you keep it. If not – away it goes.

The concept sounds a little bonkers initially, but try not to let that put you off!

At first I thought I’d have literally no clothes left (never-mind saucepans) if I only kept those which made me feel joyful, but I got the hang of it pretty quickly.

If you read the whole book and even then still struggle with the concept, I suggest asking yourself ‘Is this a compromise?’ instead and see if that helps.

To explain the method in more detail, let’s have a look at the first category, which is clothes. 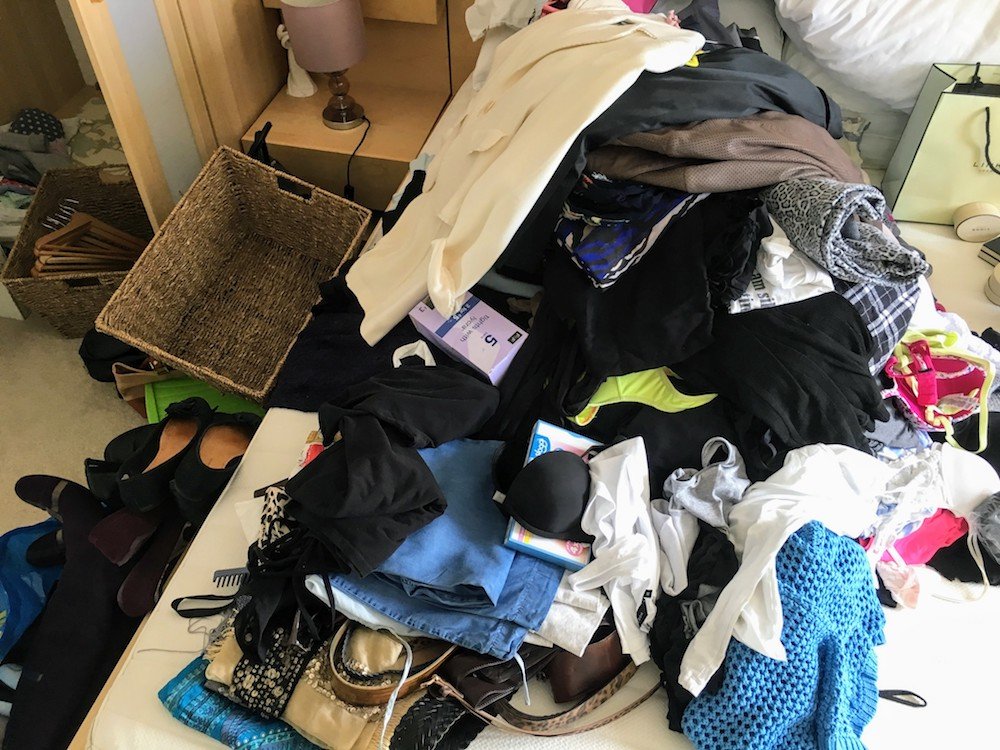 Because KonMari method decluttering involves working through things category by category, it’s important that you first gather absolutely all of your clothes together in one place.

So that includes any out of season clothes you have stored away (I forgot about those to begin with, so they’re not in the photo!) and any clothes that don’t fit, as well as coats, jackets and shoes.

Once you have done this, you will probably want to break down and cry, but try not to. 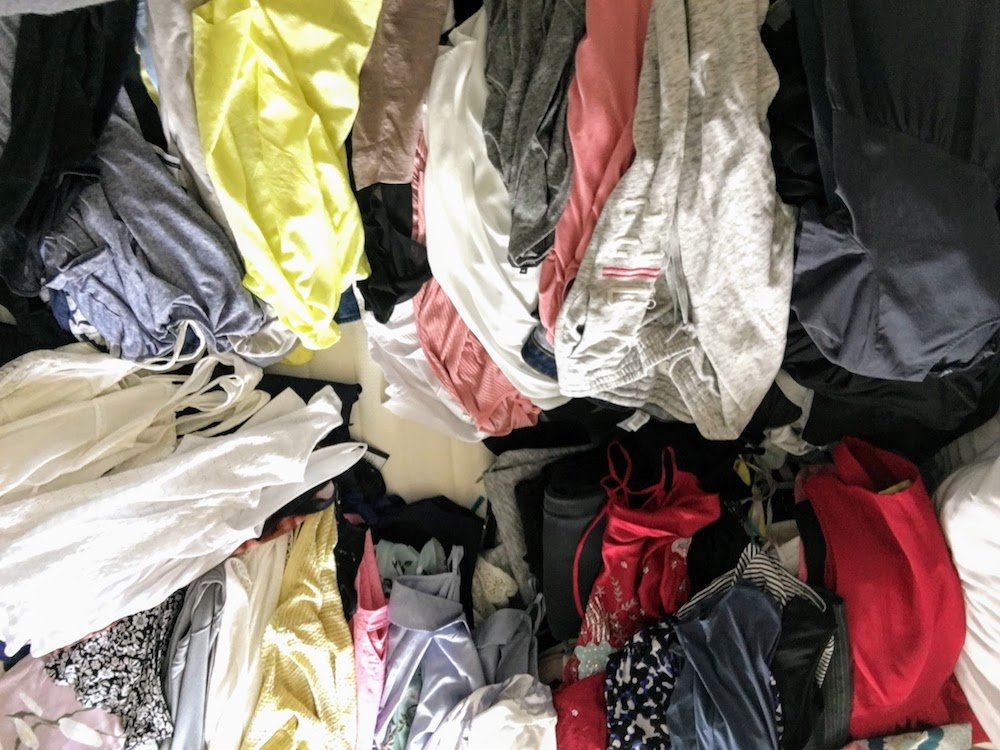 Now you need to pick up every single item in turn, hold it to your chest, and ask yourself whether or not it ‘sparks joy’ (or, like I said, whether keeping it is a compromise).

If you decide it doesn’t and you want to get rid of it, then you must first of all thank the item for what it has given you (maybe it kept you warm, or taught you that a certain color doesn’t suit you).

Being someone who appreciates that clothes are inanimate objects, I found this difficult.

However, I did find that it made it much easier to let go of things and select only those items that I really love. So give it a go, just make sure there’s no one around to witness the madness. 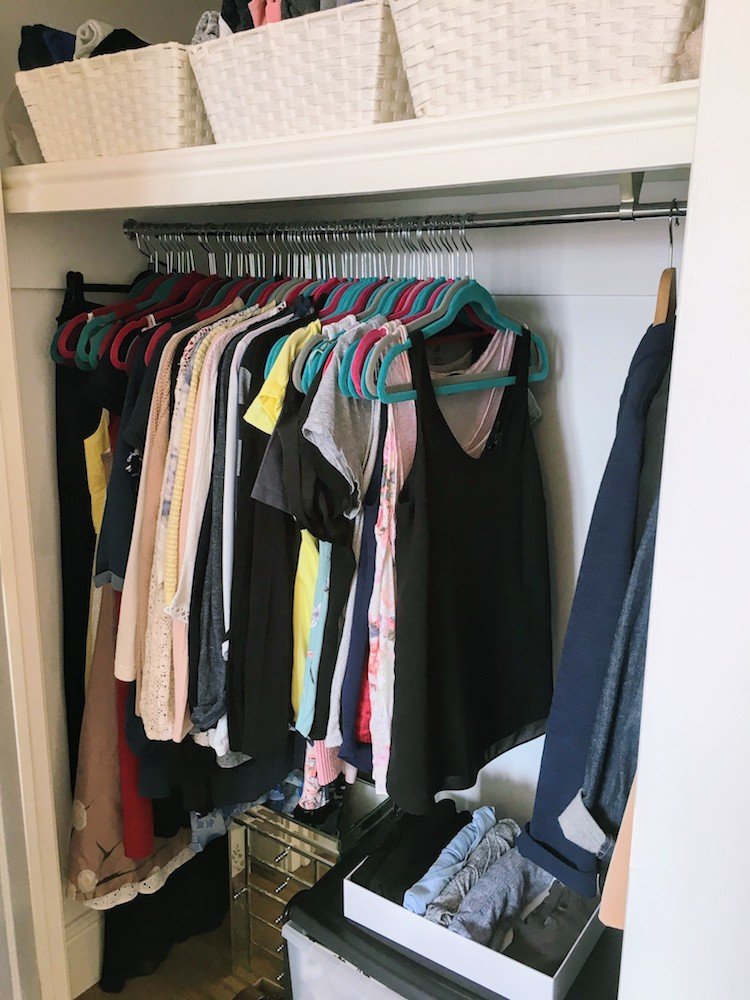 And finally, once you know what you’re keeping, it’s time to put it all away (more on that in a moment).

I’ve read lots of blogs saying that people have got through their entire wardrobe declutter in a few hours. I do not see how this is possible, but then I did have an awful lot of clothes!

What you can see in the photo above of my wardrobe is ALL the clothes I now own – including out of season clothes, which previously had a wardrobe all of their own!

The rest of my clothes have either been given to charity, or are awaiting being sold (apart from a few very tatty things which had to go to the fabric recycling bank).

I’m a little cross with myself for forgetting to take a photo of the HUGE pile of stuff we donated to charity (it included lots of my husband’s stuff also – I made him do this too!). Instead, here is a photo of my daughter ‘helping’ me.

If you have children, I encourage you to do this when they’re not there. 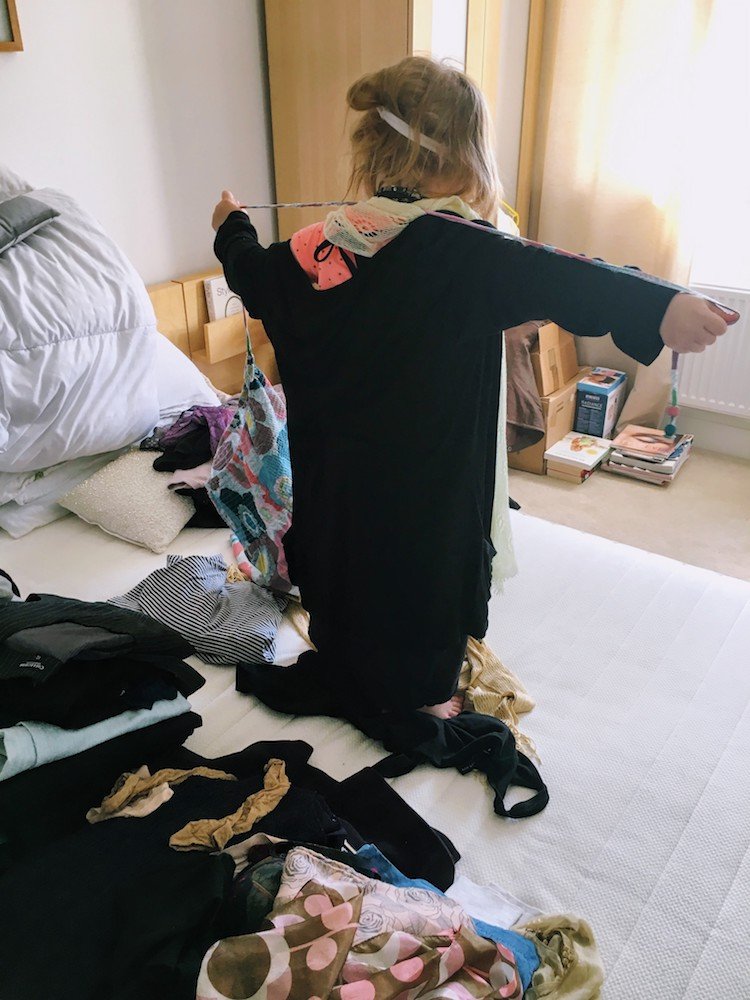 There is a special KonMari folding method to follow when it comes to putting your clothes away. It took me a little while to master (I was still a novice when I took the photo of my wardrobe!), but I am now 100% converted to this special method – although I do draw the line at folding socks, which is suggested in the book.

It’s far too complicated to explain the KonMari folding method in writing, so here’s a video for you instead!…

Once you have ‘KonMari’d’ your clothes, you can then work through all of your possessions, category by category, as shown in the image below.

It’s important to do the categories in the correct order, because that way you start off with the things that are easier to get rid of, then by the time you’ve got to the sentimental stuff you’ll be on a roll.

Depending on how big your house is, how much stuff you own, and how much time you have available, you may have to accept that the KonMari method of decluttering might take quite a while if you want to get through all of the categories.

It took me a lot longer than I expected, and I’m still not completely finished. So far though, I’ve donated A LOT of stuff to charity (more than several car loads, so I googled local charities that do van collections) and have lots of stuff waiting to be sold (hopefully it will not still be sitting around waiting to be sold by this time next year!).

Even though it’s been a huge amount of hard work, and I have felt extremely frustrated with it at times, since getting through the bulk of my ‘stuff’, I feel much more clear-headed and focused.

It’s also motivated me to start getting the rest of my chaotic life in order (back to the trusty bullet journal)!

If you try the KonMari method of decluttering for yourself, I’d love to know if you feel the same – I hope so! Here are a few photos from my KonMari week to give you an idea of what you might be letting yourself in for:

The makeup I got rid of…. in my defence, I used to work as a makeup artist! 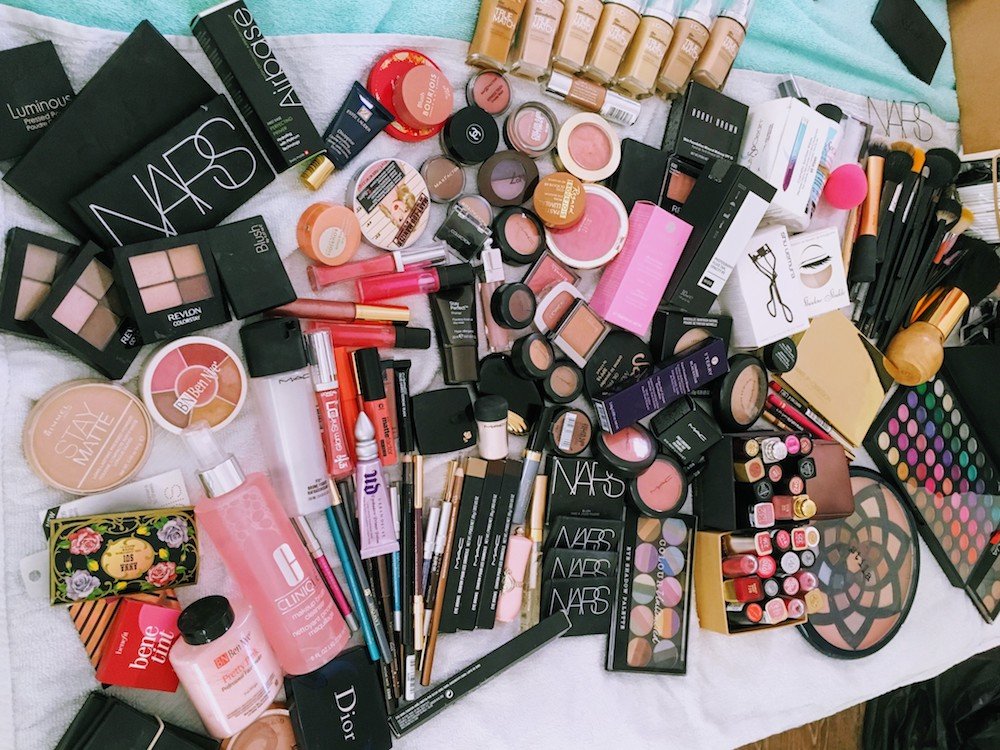 Toiletries to go – why did I think it was necessary to have seven deodorants (I’m not that smelly, honestly)?

Paperwork… this had to be my least favorite category – sooo boring.

I used a professional shredding service that also recycles (they offered collection and were very inexpensive), as there was no way my little home shredder could handle the mountain of paperwork I created! 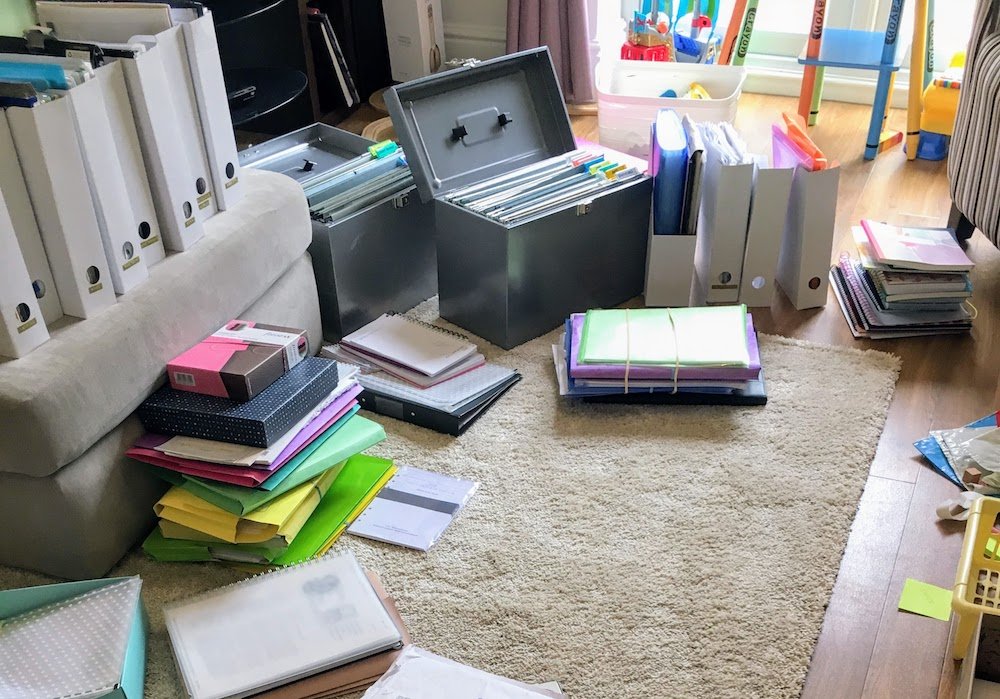 I will resist the temptation to include a photo of my beautifully organized tupperware drawer, even though it makes me so happy…. which is very sad.

And that just about does it! I hope that this has answered the question ‘What is the KonMari method?’ and inspired you to try it out for yourself.

If you’re tempted, I highly recommend purchasing the book ‘The Life-Changing Magic Of Tidying Up‘, so that you can read more about the process and understand the logic behind some of the more unusual techniques (like talking to your clothes!).

The author Marie Kondo has also released an illustrated guide called ‘Spark Joy‘, which guides you through the method with step by step instructions and an FAQ section. I don’t have that one myself, but I suspect that it might actually be even more helpful than the original version.

I’d really love to know how you get on with decluttering your life the KonMari way, and if you feel the same way I did afterwards… let me know. Good luck!

Enjoyed ‘What is the KonMari Method?’ Why not save it for later on Pinterest… 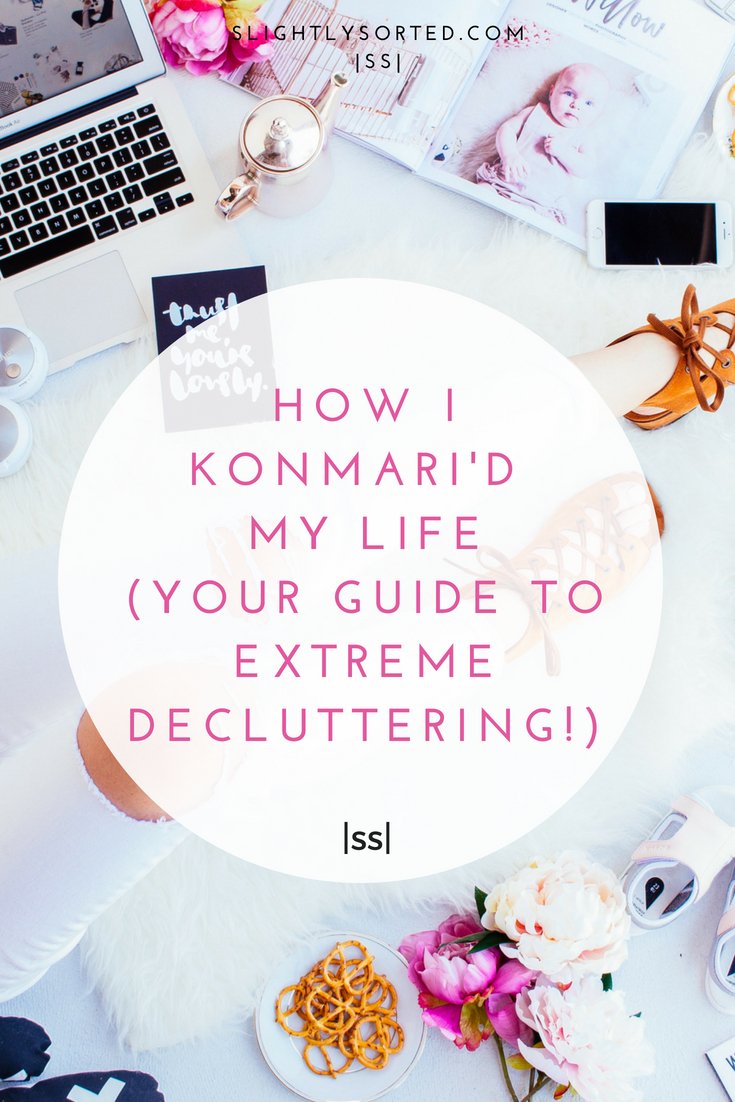 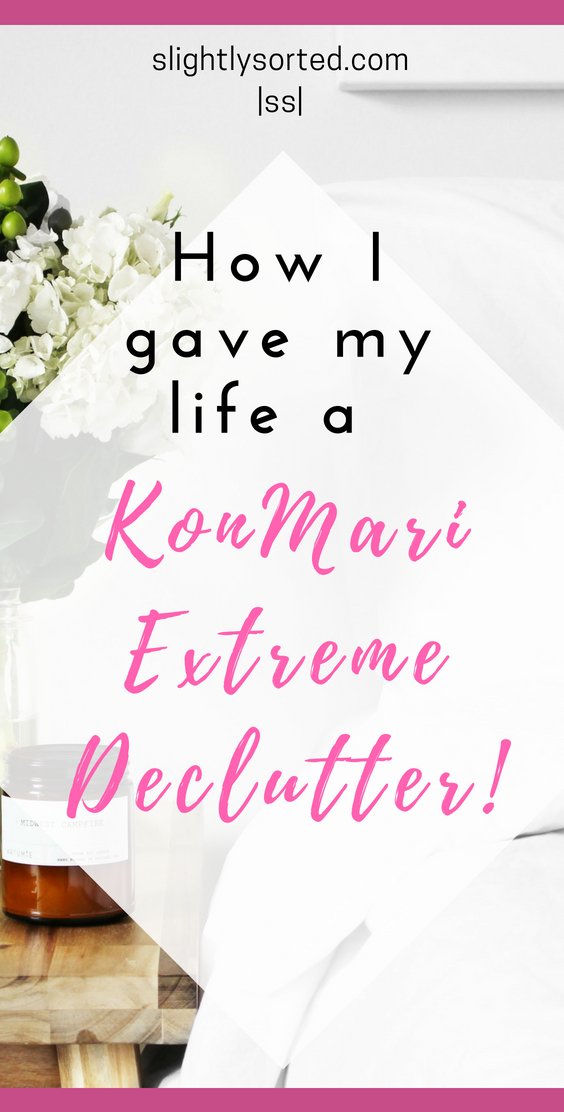 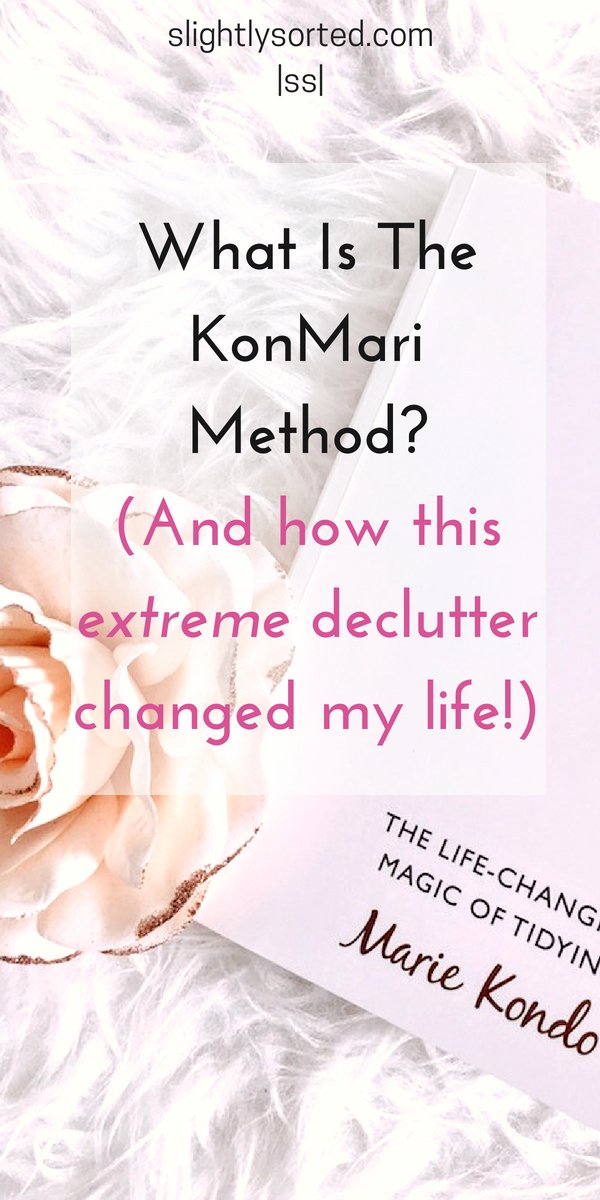 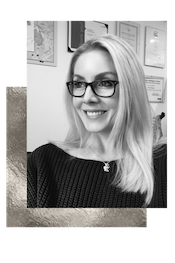 Welcome to Slightly Sorted, where my mission is quite simply to help make life a little bit easier and a little bit better! You'll find tips, tricks, and articles on helping you to live your best life - from the big stuff, through to the little things that make all the difference. I hope you enjoy Slightly Sorted!
| Tara |

END_OF_DOCUMENT_TOKEN_TO_BE_REPLACED

How to start a blog

Some links on slightlysorted.com are affiliate links – please see the disclosure tab on the bottom menu for full details, thank you!